Time:2015-11-17By:wendy
On the Nov.13 2015,The Nigerian government delegation  visited  Henan china.the leader of Henan Gelgoog Machinery Co.,Ltd,Lijunhua with other companies have business communication with nigerian government delegation.the governor of States ,named Ayad make a economic development introduction on nigeria.
Previously, Nigeria's economic development has been years of military rule, corruption and mismanagement problems, but is now making a successful return to democracy in Nigeria and the subsequent economic reform back on track.He began to play its strong economic potential,in order to achieve the target of being the major economies in Africa.
Nigeria had a lot has not been large-scale development of mineral resources, including natural gas, coal, bauxite, tantalite, gold, iron ore, limestone, tin, niobium, graphite and zinc. Although these natural resources have great reserves, but the country's mining industry is still in its infancy.
Manufacturing Nigeria including leather manufacturing and textile industry (concentrated in Kano, Abeokuta, Onitsha and Lagos), car manufacturers (such as the French carmaker flag and British truck manufacturer Bedford, now a subsidiary of General Motors), T-shirts, plastic manufacturing and food processing industries.
Agriculture is Nigeria's main foreign exchange earner in the past the industry. Nigeria in the past was once the world's largest peanut, an important producer and exporter of cocoa and palm oil, coconut, citrus fruits, maize, pearl millet, cassava, yams and sugar cane. Approximately 60 percent of Nigerians engaged in agricultural production, and the country there are many untapped arable land.
After business communication,the delegation hope have a long term coorperation on food processing and other processing. 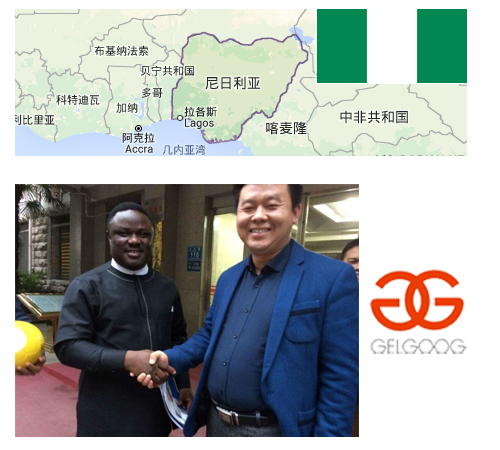